No 4, three jewels of the timeless collection of Russian orchestral music.

Posted by Unknown at 9:38 PM No comments:

Upcoming Projects!
I have a lot on my plate right now...which is a good thing. First of all, I need to let everyone know about a couple of upcoming recitals in February and March.
Brass Soloists of the Elgin Symphony Orchestra
February 13, 2010 at 4pm
Sherwood Conservatory Recital Hall at Columbia College
Joining me will be ESO Hornist Sharon Jones and ESO Principal Tubist Charles Schuchat. I will be performing Christopher Gordon's Concerto for Bass Trombone, as well as playing euphonium on a couple of brass trios.
In the last week of March, I will be giving a guest recital and masterclass at the Hugh Hodgson School of Music at the University of Georgia in Athens.
As a part of the Elgin Symphony Orchestra's Exiles in Hollywood Festival this season, the Gail Borden Public Library will be showing a series of films highlighting our featured composers. The three films to be shown are Double Indemnity (scored by Miklos Rozsa), Rebecca (scored by Franz Waxman) and The Seahawk (scored by Erich Wolfgang Korngold). Yours truly will be introducing each of these films and be giving some background on the composers.
I have a few other big projects in the pipeline which I need to keep "under wraps" for the time being. One of which, I am planning on having up and running in the next couple of months. All I can say at this time is that it will be very unique and hopefully a really good resource for students and professionals. More information to come soon!
Posted by Unknown at 5:28 PM No comments:

This great quintet will be on campus to share a performance / masterclass, for our students and open to the public.

Boston Brass is setting new standards in entertainment. From exciting classical arrangements, to breathtaking vocal harmony, to burning jazz standards, Boston Brass achieves new levels in brass performance while treating audiences to a unique musical experience that captivates all ages. The ensemble's lively repartee, touched with humor and personality, bridges the vast ocean of classical formality to delight audiences to an evening of boisterous fun, exciting knowledge and an enthusiastic love of music, deftly exhibited by five brash brass players. Boston Brass has transcended the traditional mores of brass ensemble literature and, with a host of original arrangements, has pioneered a new generation of music that sets out to achieve one simple goal: entertain at all costs with blistering precision. Whether they are performing solo or with a symphony orchestra, the fun and emotion exhibited from this group is uniquely infectious and keeps audiences on their feet, demanding encore after encore.
Posted by Unknown at 3:07 PM No comments:

Masterpieces from the greatest
of all Czech composers

The James Lumber Center for the Performing Arts in Grayslake, IL

Posted by Unknown at 7:21 PM No comments:

Too Hot To Handel
Trombone Section - 2010 Pictured above - Mark Fry, Tracy Kirk and Stephen Berry.
This weekend marked our fifth year of performing Too Hot To Handel in the historic Auditorium Theatre in downtown Chicago.
Posted by Unknown at 7:41 PM No comments:

Fun Trombone Video of the Week
Hilarious! The fun begins right at the 7 minute mark. Thanks to Larry Zalkind for passing this along!
Posted by Unknown at 5:48 AM No comments: 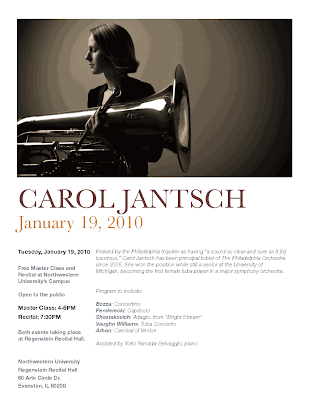 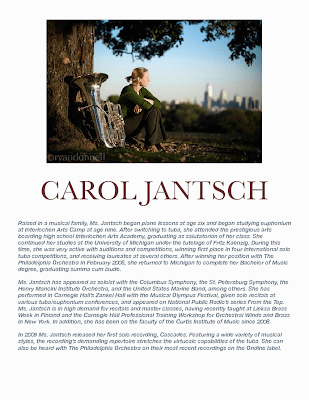 Posted by Unknown at 7:45 AM No comments:

Too Hot to Handel: The Jazz-Gospel Messiah

"Presented to honor the birthday of Dr. Martin Luther King Jr., Too Hot to Handel expressed a message of peace and exultation that was entirely appropriate for the occasion." - Howard Reich, Chicago Tribune

Our "hottest" annual tradition returns for the fifth year! The Auditorium celebrates Dr. King's birthday with a joyful, exuberant, all-American version of Handel's beloved oratorio. Join our soloists, orchestra, jazz combo and Too Hot Choir for the jazziest, swingingest Messiah you'll ever hear!

Critically acclaimed tenor Rodrick Dixon and soprano Alfreda Burke will return for the fifth year. Joining them is alto Karen Marie Richardson, who electrified audiences with her portrayal of Lulu in this summer'sThe Mistress Cycle.

If you've experienced Too Hot, you know the power and energy of this production; if you've never been, this is the year to find out why audiences are coming back again and again.

Save 20% when you purchase a 6-seat box - use promo code TOOHOT. (Must purchase entire 6-seat box. Upper boxes only. May not be combined with any other discount or offer. Subject to availability.)

Posted by Unknown at 8:13 AM No comments:

Fun Trombone Video of the Week
This video features a solo by the great Carl Fontana. Nuff Said!
Thanks to my friend Dan Mattson for originally posting this on Facebook.
Posted by Unknown at 2:45 PM No comments: 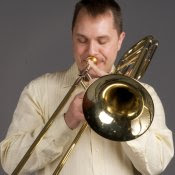 Reed Capshaw in Recital Tomorrow Night!
Program to include works by Beethoven, Defaye, Hindemith, Mahler & Sulek
Reed Capshaw is one of the premier free-lance musicians in the Chicago area. Currently, he is Principal Trombonist of the Lake Forest and South Bend Symphonies. In addition, he has performed with the Chicago Symphony Orchestra, Cleveland Orchestra, Lyric Opera of Chicago, Milwaukee Symphony Orchestra and Elgin Symphony Orchestra among others. Mr. Capshaw is the instructor of trombone and low brass at North Central College.
This is sure to be a great concert. Don't miss it!
Posted by Unknown at 5:30 PM No comments:

ESO Performs Symphonies by both Brahms and Shostakovich This Weekend!
Brahms & Shostakovich
Friday, January 8 - 8:00pm
PRAIRIE CENTER FOR THE ARTS

Tania Miller, who has won high praise as the first female music director of a major
Canadian orchestra, brings her extremely evocative touch to three of our favorite
composers. You will not want to miss this powerfully passionate performance!
Posted by Unknown at 11:49 AM No comments:

Fun Trombone Video of the Week
Here is a great behind the scenes look at the recording for upcoming video game, God of War III. This video features Scott Thornton, San Francisco Ballet Principal Bass Trombonist at the Skywalker Ranch Recording Studios. Enjoy!
Posted by Unknown at 7:48 AM No comments: